Three Bon Appétit managers suddenly quit their positions with university dining services just after orientation, spurring the hiring of three new staff members. The former managers of General Dining, Catering, and Dining Operations left looking for a change in the work environment outside of the food industry.

Austin Kumm, the new Dining General Manager, has been with Bon Appétit for five years and previously worked as the operations manager. Once he saw the General Manager position open up, he decided to take the opportunity to move up the chain.

Bon Appétit has yet to have a normal year, as they began serving Pacific students in 2019: the year when the first COVID-19 shutdown occurred. Because of this, Kumm is looking forward to navigating the needs of the students.

“My goal is to get us more stabilized and build relationships with the students and the community, understand that each campus is different and really understand where the needs are and how we can best meet those needs,” said Kumm.

Loren Mason, the new Dining Operations Manager, joined the Bon Appétit team this term, making this the first university for which she has worked with. She always wanted to work for Compass, the contractors for Bon Appétit, and in her role with the company, she hopes to collaborate with Pacific students. For example, several students already inquired about when the dining service will switch back to non-disposable dishware.

“[One of the] biggest challenges I have faced so far is trying to appease the students and keep them patient enough and in the loop enough to know when we are going to go back to china and silverware,” said Mason.

Currently, the Bon Appétit staff is waiting on a part for the dishwasher, as there have been countless shortages across the globe. They are hoping to replace the part at the start of the spring term so they can begin using non-disposable dishware once students return.

“Getting with the student population, listening to what they say about their diet requests or their cultural food requests and making sure it adheres to BA standard is my goal for [this school year],” said Mason.

Delilah Ahrendt, Bon Appétit’s new Caterer, came into this position after falling in love with university life and feeding others. From her Polish heritage, Ahrendt strives to bring people together through food just as her family taught her.

“[Dinners] became a family event in which everybody not just ate, but told stories and I have always been drawn to that side of culinary cooking, the story that goes with food,” said Ahrendt.

Arhendt and Mason both hope to bring cultural foods to students that remind them of home. If students wish to see any food that is not currently available, both encourage students to fill out recommendation cards with any food they wish to see. Comment cards can be found on the corkboard near the dish return in the UC cafeteria, by the table on the register, or online. — Allison Wills 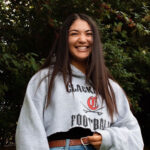 Allison Wills is a sophomore and a writer for the Index. She plays the saxophone in the symphonic band at Pacific. In her free time, she enjoys spending time with her friends, listening to music, and volunteering at the hospice.