It was established to discuss racism and social justice within the world but more specifically on our campus and what we need to do as students as well as a school to make Pacific a more accepting and comfortable environment for everyone. Julien Dagan, student affiliate for the Affinity Group, describes this group as a “safe space,” where athletes are allowed to express their true feelings towards subjects that are sensitive to the public. “This Affinity Group allows for a safe space at Pacific to speak up because we have a voice as well,” said Dagan, who plays on the Pacific Women’s Lacrosse team.

Equality amongst all invokes positivity amongst the athletes, as well as the other students, which helps give that connection of security and acceptance to everyone. Dagan pushes for a better overall connection between every student and will accept all who wish to participate in the group.

Pacific preaches for its diversity amongst students and looks to support them in any way possible. People have an opinion and a say in the things happening around school, and Pacific wants students to feel safe and feel proud about themselves, no matter what ethnicity or race.

Dagan explains that her viewpoint comes from a student and someone who truly believes that speaking up invokes a positive change that could lead to change amongst society to enhance the capabilities of equality amongst all.

Lauren Brownrigg, Associate Athletic Director, preaches that the group is a step forward in today’s society because it is majority student-run. It shows that the students are willing to take the initiative in attempting to voice their own opinions.

Brownrigg said, “If students are willing to do this on their own, without anyone forcing them to, it will allow students to realize that there is an incentive for change that students need to recognize and take part in to  make a change.”

The Affinity Group is a chance for student-athletes to hold themselves and Pacific University accountable for the social injustices which take place around the world as well as on this campus. — Todd Takeuchi 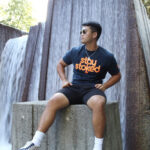