The process for preparing an American classic has transformed the way one cast is viewing their lives. The cast of Our Town is reassessing how they spend their time. The theatre department is daring to take this classic about ordinary people and turn out a standing ovation by applying their own experiences.

Our Town is a 1938 three-act play by the American playwright Thornton Wilder. Pacific senior Gavin Knittle picked this play to direct because of the underlying theme of time.

“I’ve been zeroing in on every line about time,” said Knittle. “It seems the older we get the faster it goes. I think it’s imbued the actors with the sense the audience needs to slow down their lives, to not take every day for granted.”

This cast is the biggest Knittle has seen in his time here at Pacific with 17 actors.

The actors are working to make this play their own by honing in on the comedy in the first and second act, said Knittle. He said those acts are funny because this play is fairly plain.

The actor’s chosen for this production have come together better than Knittle said he could have hoped.

All having acting experience through another Pacific production or within LunchBox Theatre, Knittle said the brilliance of these actors make his job easier.

Those involved with the production agreed about the continuity of the cast and their insight into a deeper meaning than just the surface of the play.

“The most fun has been getting to look into the actors process, seeing what they get out of it,” said theatre and dance assistant Rose Engelfried. “Getting to see how it all comes together, it’s a much bigger thing than it seems.”

This production and the focus on temporal element that time is simultaneously fleeting and precious has drawn in a wide promised audience.

Engelfried said a local high school class is attending the performance, as it was recently part of their curriculum.

While Our Town is studied in many high schools across the nation, Knittle emphasized the third act narrows in on the reflective aspect of the play.

“The third act gives the audience the motivation to appreciate their lives,” he said. “It’s a whole different animal.”

Our Town was first performed in 1938 making this year it’s 75th anniversary.

The classic’s anniversary is a reminder of the importance of live theatre, said Engelfried.

“Students should always come to see live theatre,” she said. “It’s cool because we are doing a classic.”

The old time piece is still applicable today, said Knittle, and the cast in the theatre department is having fun with the realness of it.

“There’s something really magical about this play that gives people a greater understanding of their own lives,” said Knittle.

Engelfried agreed the cast was taking the production to heart.

“Gavin’s making it a lot more universal,” she said. “They’re all slowing down and thinking about how they’re spending their time.”

Our town will be performed at the Tom Miles Theatre on March 14-17. 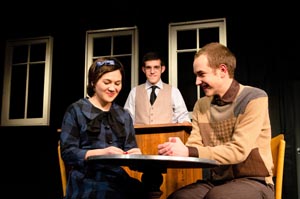