As students return home for Thanksgiving and winter break stands just around the corner, the Index staff is feeling the holiday spirit. To spread the cheer, they’re sharing their favorite songs of the season.

Growing up, this Michael Bublé song was one of my favorites, as I always dreamed of having snow on Christmas or on my birthday, which is December 31st. I remember listening to it on the radio in the car and it brings me so much nostalgia now. “White Christmas” is such a warm, comforting song and brings me back to childhood Christmases, going to Christmas tree lots, and experiencing the first snow of the year. If you want to get transported back to the early 2000s, Bublé’s holiday song is the perfect fit. — Grace Alexandria

“Where Are You Christmas?” – Faith Hill

I always forget this song exists until I hear it again, then I’m rushed back to the year 2000. I’m three years old again, watching How the Grinch Stole Christmas on a green VHS tape. Christmas is still magical. Santa still exists. There’s no school or class or work to worry about. I’m still a kid, snow is falling outside, I’m sipping on hot cocoa, and Faith Hill is giving the performance of a lifetime, standing on top of a snowy mountain, a dog with antlers tugging at her gown. Jim Carrey is there too. All is right with the world. — Bren Swogger

I’m the type of person who starts singing when I’m bored and usually I end up singing Christmas songs, even if it’s June. My go-to song has always been “Jingle Bell Rock” by Bobby Helms because of how catchy and fun it is. Granted, I don’t know half of the lyrics, but I usually only end up singing the chorus anyways. “Jingle Bell Rock” is a holiday staple, especially if you’re a fan of Mean Girls or any holiday movie. It’s a classic, which means you’ll find it in all of the Hallmark movies and you’ll hear it at the shopping malls. Although it’s everywhere, I don’t think I could ever get sick of “Jingle Bell Rock” because it perfectly exudes the holiday spirit and captures the essence of Christmas. — Grace Alexandria

Okay, out of all the cringy 80s Christmas songs, this one probably catches the most flack. But you can’t tell me that this George Michael half-hilarious, half-beautiful, synthy Christmas breakup extravaganza doesn’t slap. At this point, I’m not sure if I sincerely like the song because I appreciate the musicianship or if I just listen to it to excess ironically. Either way, blaring “Last Christmas” and breaking out some truly mortifying 80s dance moves in the kitchen with my family is an essential and nostalgic part of the holidays for me. Plus, I think that there is a primal, visceral urge coiled deep within me (and, quite frankly, everyone in this world whether they know it or not) that lies in wait all year until the holiday season to whisper-sing the word “special” at the end of the chorus. You know it’s true. — Isabelle Williams

There’s probably no more fitting song for the holiday season this year than Phoebe Bridgers’ cover of “Silent Night.” As Bridgers and Fiona Apple duet the Christmas classic, Matt Berninger reads the 7 O’Clock News in the background. There’s a stark contrast, a jarring collision of sound and mood as we try to listen to a calming, holiday tune while politics makes the world crumble around us at an ever-increasing volume. And if that’s not a perfect representation of what celebrating Christmas this year will be like, I don’t know what is. Happy Holidays everyone! — Bren Swogger

Photo by freestocks.org from Pexels 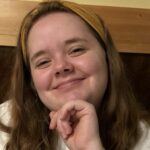 Isabelle Williams is a junior at Pacific University who is majoring in Journalism and minoring in Theatre. She is from Astoria, Oregon, and enjoys writing about music and entertainment as well as investigative reporting.