Incoming and returning students will enter onto an improved campus this fall, with many new additions, renovations and structures. 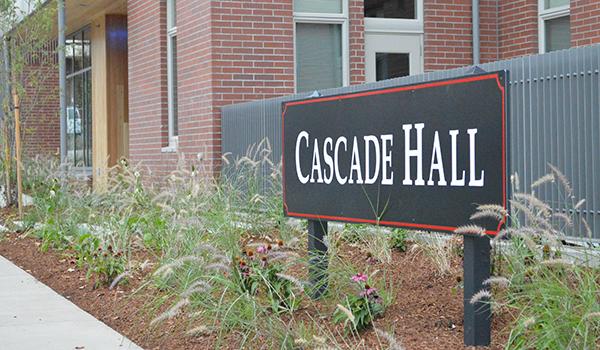 The University Center, stadium roof, bike racks and the addition of a new residence hall, Cascade Hall, are the projects that took place over the summer, and President Lesley Hallick is impressed by the progress.

“The construction has gone remarkably well,” said Hallick. “There really hasn’t been many surprises.”

For the sports fans on campus, the addition of covered stadium seating will be much appreciated during outdoor sporting events.

“During the first year we brought back football, it literally rained every single game,” said Hallick.

To her, covered seating was a necessity that wasn’t easily achieved.

“The stadium has been quite an adventure,” said Hallick.

While constructing the roof, the university had to keep access open to the field.

Other challenges included enough steal to support the structure since it has forward support beams so spectators’ view is not obstructed.

“This was an important project for events from football games to graduation,” said Hallick.

During the annual Legends Classic Auction and Golf Tournament on July 11, friends of the university Rich and Joy Hanson met the amount raised at the event for the second year in a row. The total raised was $250,000.

Money raised at the event goes toward the Pacific Athletic Fund, which paid for the stadium roof.

Sports fans aside, the other construction projects this summer were geared toward the rest of the student body.

While Cascade Hall was open in time for orientation, the goal is to have the university center completed by the first day  of classes, Aug. 25.

“The U.C. was the most challenging and on the tightest time frame,” said Hallick.

Reconstruction of the U.C. didn’t start until after the annual Music in May event on campus.

Hallick explained the goal of the U.C. renovation was to open the space up to allow for a larger seating capacity and a more friendly study and hang out area for students.

“My hope is it will feel good to hang out and be quiet enough to study,” said Hallick. “I want it to be the student living room.”

Besides taking out the transfer student lounge and Pacific Information Center office to make the main floor of the U.C. more open, there will also be a new circular sky light, food areas and a Starbucks, which will be completed by the end of September.

“We financed the renovations in a favorable way, not to say we don’t want philanthropic gifts,” said Hallick.

Cascade Hall has yet to be named after an alumni or friend of the university, and Hallick said she has had conversations with a few prospective donors.

“I’m interested to see how this plays out,” said Hallick.