Along with the chorus of cheers for our football team there comes a cheer of a different sort.
“What’s the score?”
“What did they Ref just say?”
“How much time is left?”
Welcome to Boxer Army seating.
Every Pacific student who has attended a game at the Lincoln Park Stadium knows exactly what I’m talking about. But to list it out so we’re on the same page, let’s start from the top. The seating. No matter where you sit, it is impossible to see.
Sitting to the left, prepare to bend over backwards to attempt to see the score. Sit to the right and get ready to strain your eyes catching the time left before the half. Either side is completely unhelpful for following any plays during the football games. Not to mention you have to run from one side of the field to the complete other to follow our teams.
Ultimately, Boxer Army seating is not cohesive for following any football game that takes place in Lincoln Park Stadium.
Second on the list is the PA system. While I have my complaints about the sound system for Lincoln Stadium in general, the echoing, the static, the random sound drops, it is impossible to hear the PA system from either of the Boxer Army seating areas.
This leaves the passionate fans in the Boxer Army seating confused, unable to follow the game.
While some may question my faith in fans to keep up with the game, I’ll explain. From personal experience, Boxer Army seating is about the atmosphere as much as the game. Many people’s first interaction with me was listening to me scream sportsmanship-like chants at the rival team at a men’s soccer game. In short, I know the atmosphere of a game well. Being surrounded by a large mob of people who are all on your team and united by yells is my definition of fun. Between screaming your lungs out, laughing with your friends, asking to borrow the roster from someone who actually dished out the two dollars for it and celebrating every point made, it’s hard to keep track of how much time is left. You get carried away in the environment and the visibility issues are by far the worst part of every game.
Considering that the majority of the students here own a Boxer Army t-shirt, a good question to ask would be what is the Boxer Army? Other than a seating area and a logo on t-shirts, Boxer Army is just an idea at this point.
If Boxer Army as an entity can come together and have some sort of government, I think there is hope for decent seating at our home games.
Talk of solutions, I got one. Move the bleachers of Boxer Army seating to either side of our rival’s small little bleacher. The bleachers are portable, so this really wouldn’t be the hardest task to accomplish.
And considering the spirit of our boxer fans, we would intimidate the hell out of any team daring to challenge us.
There would of course need to be an appropriate distance between the rival’s bleacher and ours, but besides that it would give fans a clear view of the score board and the game itself. Who knows, maybe the PA can be heard crystal clear from the other side of the field.
Something needs to change soon though, or I fear fans will continue to leave at halftime or not show at all because of the disgruntling placement of Boxer Army seating.
I must note that Blaise Holden, president of the Colleges of Arts and Sciences Student Senate, has been taking notes at the majority of the home games to improve the Boxer Army seating and to bring Boxer Army together in general.
I urge for CASSS to hurry with changes for improvement.
Given the number of gung-ho students at the start of games, CASSS has an army behind them supporting change for the Boxer Army seating. 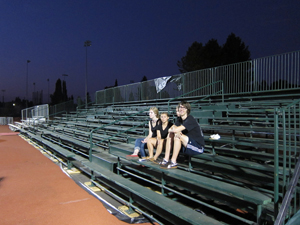 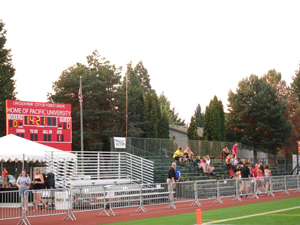