Only during Pacific’s LunchBox Theatre improv performances could “Pokemon trainers from Narnia with unibrows” be acceptable dating candidates and “sweaty blonde girls” be a constant subject of discussion.

Thanks to both the Psy Chi and Drama Club, last Thursday and Friday, Sept. 20 and 21, were filled with laughter as a group of student actors provided performances in the Black Box of Tom Miles Theatre.

The improv shows greatly resemble skits from the hit comedy show “Whose Line is it Anyway?,” catered to a college audience.

With no scripts and limited rehearsal, everything performed was done on the spot, fueled by nothing but the creativity and spontaneity of both the actors and audience.

Each night the show’s attendance grew, going out with a bang for the Friday midnight performance as LunchBox Theatre’s largest crowd in history, more than 50 people, crammed into the Black Box.

Hosts Chris Mikulic and Michael Johnson were astounded. “In the past, LunchBox improv shows have seen crowds as small as four audience members,” said Johnson.

“It’s both an amazing and frightening thing to go out on that stage and see the attendance increased by over 3,000 percent.”

Students went crazy for the originality and humor stemming from the performance.

As all LunchBox Theatre productions are free to attend, many took the opportunity to see multiple showings—instead of a typical play, improv is never the same show twice.

There will be more features from LunchBox Theatre throughout the year, including another improv show in the spring.

The performance from those auditions will be Oct. 25 and 26. 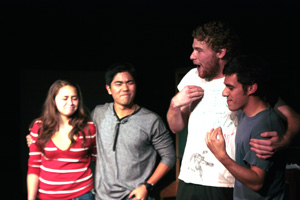