October is here, which means hordes of pumpkins and their jack-o-lantern kin aren’t far behind. Pacific will be hosting a free pumpkin carving event Oct. 13 as part with Family Weekend.

The activity is sponsored by the Parent’s Association, which will provide 100 orange canvases along with a medley of carving utensils and patterns. Attendees are encouraged to be as artistic as they want.

“I think this is a great event for Family Weekend,” said Assistant Director of the Pacific Information Center Angela Surratt. “We usually have a lot of parents and students that carve pumpkins together. Sometimes they have their younger siblings with them so it is a fun event for the entire family.”

While a messy undertaking, carvers need not worry about their jack-o-lanterns’ guts. According to Surratt, all organic refuse generated from the event will be collected and given to the local pig farm that provides animals for kalua pork at Pacific’s annual Lu’au feast in April.

The fun starts in the tailgate area near Lincoln Park Stadium at 11 a.m. and while is scheduled to end at 1 p.m. will likely continue until all pumpkins have been given a personality. 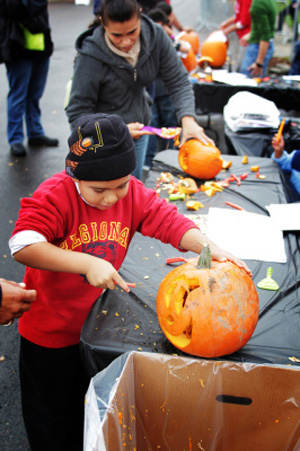