Last spring, junior Taylor Hickson was faced with the dilemma of playing video games or enjoying the first sunny day of the year.

The logical solution, Hickson decided on was to play “Battlefield” and enjoy the nice weather, simultaneously.

Hickson said he could have never foreseen that a photo of him at his desk, chair and computer trying to catch some rays outside of Clark Hall, would later become a famous meme.

On April 10, Hickson posted one of the numerous photos taken of him onto Reddit.com, a social news site where members post photos, links or text that is voted on by other users. Whether a person’s post is voted “up” or “down” determines what page of the site it will appear on.

“I never expected the photo to become so popular. I was nervous to post the picture, but then everyone actually liked it,” said Hickson.

After a few days, Hickson logged onto Reddit and saw that his picture was on the first page of the site and had been transformed by an unknown source into a meme, a photo with text that carries cultural ideas, symbols or practices usually in a joking manner. The meme had Hickson’s photo pasted at the top and read underneath, “Mom said go play outside”.

Within a week, the meme was featured on Facebook’s meme page. From there, Hickson said he has seen it almost everywhere, on media sites such as Facebook and other social news sites like Reddit. Don’t believe him? Simply type, “Mom said go play outside” into Google and view the images. The majority of the picture results are of the meme created from Hickson’s photo.

“All of my friends constantly talk about seeing the photo or seeing their friends from home post the photo on Facebook,” said Hickson about the claim to fame he has received since.

Hickson also added that a few weeks ago a person in one of his classes recognized him from the meme.

As for trying to create another meme worthy photo, Hickson said he’s going to step out of the game while he’s on top.

“It’s been successful and if something happens again, I’ll post it,” said Hickson. 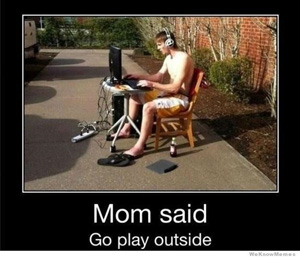