For the ninth year Pacific University is displaying a piece of the largest community art piece in the world, the AIDS quilt, as a memorial to those lost and a warning message to students on campus.

The quilt was created in 1985 after the forefront of the AIDS epidemic; each panel featuring a different person’s name, date of birth and death and various pieces of his or her life. It was created as a means of action in San Francisco to bring attention to the gay men dying of the disease.

The quilt has grown to a 54-ton tapestry with more than 46,000 panels dedicated more than 91,000 lives lost. Four blocks of the tapestry are being displayed in the library until Dec. 22, the day after the national AIDS/HIV awareness day, as a way to communicate the severity of AIDS and safe sex to students.

“We brought the quilt here to be an educational tool. AIDS is life-threatening. Since the discovery of life-changing medications, making AID’s more survivable, people think it isn’t as scary but everyone I know suffering through AIDS agree that it is a miserable way to live. AIDS is here on campus and students need to know about it,” said community organizer Cecelia Warner.

To bring a stronger connection to the campus and Forest Grove as a community the Center for Civic Engagement volunteers made certain to include a name from at least one Forest Grove member who died because of AIDS every year since it was brought to Pacific. This year the community member featured on the quilt is Mike Westwood.

“Roughly 6,000 people will see the quilt in the time that it is here. That’s a lot of eyes. I think there is a cognitive dissonance that exists when dealing with AIDS. Hopefully these panels should remind people of the consequences and to be safe,” said Warner.

The costs of ordering and shipping the portion of the quilt to Pacific for a month are approximately $1,000. Pacific University and the CGE are responsible for providing the funds as well as the man hours, with the addition of a generous library staff.

Warner specifically remembers watching a young woman on campus be told that she was HIV positive and seeing the devastating reaction in the 19-year-old’s eyes in 2006.

“This is a small campus and I know for a fact that there are people suffering from AIDS here. Students need to be made aware of this. If there is one thing I want people to take away from this display it is knowing the necessity of having safe sex,” said Warner. 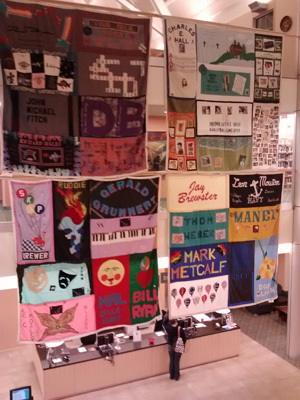