The new residence hall,  Cascade Hall, is finished, and students are beginning to call it home.

Standing four stories tall between the University Center and tennis courts, it is already 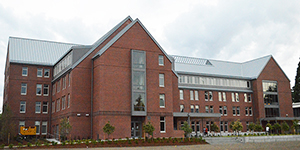 clear that this residence hall is going to have an impact on the way students experience campus life.

For Senior Resident Assistant, senior Lucy Lawrence, working in Cascade Hall is going to be full of new experiences. This will be her first year working in a freshman dorm. Lawrence knew that it would be a challenge and she said she’s excited and ready to take on the experience.

“I am really excited to be working with first-year students because there is so much energy that goes with it,” said Lawrence. “Freshmen are so excited about everything and everything is new to them.”

While Cascade will be primarily focused on freshmen, it also is housing a large number of returning students who will take up the top two levels.

The new resident hall is already a buzz with constant tours and students wanting to hang out in the new lounges.

Lawrence said she believes initially there are going to be a lot of people wanting to come and visit the new building, but that will wane as the school year progresses. She said it would still be a great spot for people to hang out because of the lounges.

“This is the first year that the building will be open, we have an idea of what we want the atmosphere to be, which is very community oriented,” said Lawrence. “But we won’t actually know until the students move in.”

The design of Cascade Hall was due to the effort of several people working together and many new ideas on space and efficiency. Because there was such a concentrated effort and concepts put into the design, the people who designed the building will be returning to campus to see how students are actually using the spaces that they designed.

Through the building efforts, the universitt hopes Cascade Hall will be a Leadership in Energy and Environmental Design (LEED) certified building in the next 13 months, which is the standard waiting time before a building can be certified.

There are many perks to living in the new residence hall. One of the perks being that each room has its own heating and cooling system that the student has complete control of. There will also a fire pit in the front of Cascade Hall.