On the morning of Sept. 15, Director of Civic Engagement Stephanie Stokamer looked at those registered and read just more than 120 people were signed up to serve at the Pacific Day of Service and 50 people walked in to volunteer their time.

One hundred seventy people gathered Sept. 15 with the sole intention of giving back to the Forest Grove community.

The first-ever Pacific Day of Service was a success overall for the Civic Engagement Department, but more so, a start for greater opportunities to give back in the future.

The Civic Engagement Department is grateful for those who attended and donated their time and energy.

Out of the 170 participants, the individuals involved consisted of 119 undergraduates, 22 graduate students, eight faculty members, four staff members, four administration members, three alumni and 10 other individuals who were mostly spouses, significant others or children of faculty.

Two of the administrators serving were President Lesley Hallick and Dean of Arts and Sciences Lisa Carstens. They delivered refreshments to nearly every volunteer site to meet with those volunteering and to experience for themselves Pacific’s Civic Engagement Cornerstone.

“We learned people like to serve with other people,” said Stokamer.

This day came also came as a surprise to many of the upperclassmen who have experienced the no-longer-existent Sprucing up the Grove, an event held during orientation where incoming freshmen dedicated their time to a project with their pod.

“We heard enough negative reactions to sprucing that I was worried about that being students’ first experience with civic engagement,” said Stokamer.

The Civic Engagement Department also realized that along with no choice in the project people participated in, the rest of the Pacific community was unable to partake since sprucing was held before the semester started.

Being the first event of its kind, the learning experience has stuck with Stokamer and the others involved as they reflect on the event.

“I want us to build on what we discovered about group participation,” said Stokamer. “And to smooth out minor details.”

The 12 projects with five filled completely came across a few unexpected little things. For example, those going to volunteer at the Council Creek Ryland Park Stewardship Day learned when they got to the site that they would have to hike to Council Creek. The group managed the hike without injury.

“There are definitely areas we can improve,” said Stokamer. “But those will come with time.”

The other area where improvement is being considered is on timing and time management. Pacific’s Day of Service was held on the same day as the Sidewalk Chalk Art Festival, Annual Corn Roast, 5K Run/Walk 4 Sight and the Oregon Technology in Education Network Annual Conference.

“It was crazy,” said Stokamer. “I don’t know how it affected our participation.”

Plans to prepare in advance before the Day of Service by gaining more publicity and having a team of organizers are just some of the thoughts Stokamer has for the years to come.

For now she is focused improving the event for the future.

“I look forward to building it up next year,” said Stokamer. 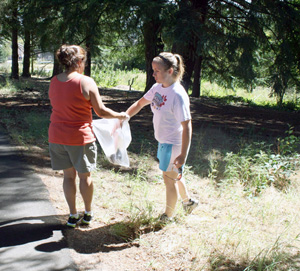